Mark Towill and Charlie Enright have made their mark as two-time participants in The Ocean Race by sailing on the one-design Volvo Ocean 65 (VO65) in both 2014-15 and 2017-18 editions of the race.

For 2021-2022, The Ocean Race has announced that both the VO65 and the IMOCA 60 Class of boats will both join the race course in this 14th edition of the round-the-world race. The IMOCA 60 entries will compete for The Ocean Race Trophy, while the more moderate VO65 fleet will make its third appearance for teams to race for The Ocean Challenge Trophy.

Traditionally designed for sailing in single- and double-handed configurations, the IMOCA 60 Class is most famous for the single-handed round-the-world Vendee Globe race. The last five years the development class has taken sailing monohulls to new heights – literally out of the water. Teams are pushing the limits on design and technology.

Mark and Charlie have spent the last two races getting comfortable on the VO65s, first on Alvimedica in 2014-15 and then on Vestas 11th Hour Racing in 2017-18. They are now ready for the challenge of entering the next edition in a development class.  The team took ownership of a foiling IMOCA 60 (the former Hugo Boss of Alex Thomson Racing) boat earlier this summer, re-fitting and re-branding it for 11th Hour Racing.

They have begun their training on their new boat out of Port-la-Forêt, France and are pursuing a campaign for the next edition of The Ocean Race on one of these new foiling boats. Outfitted with futuristic hydrofoils, the hull can be lifted out of the water to glide smoothly across the waves. 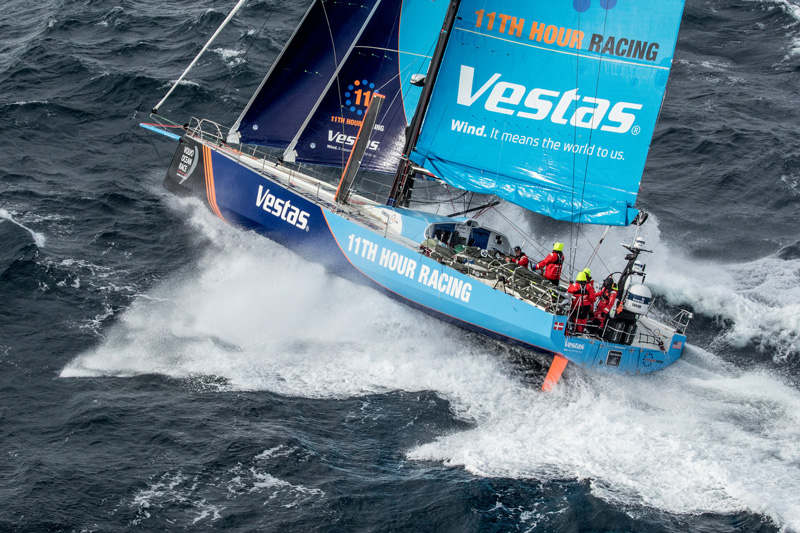 “The IMOCA class is a development class so there is so much to learn — especially with the foils and the wing mast and the way all of the performance interacts with all those things. It’s an incredible process to be part of,” said Mark. “It feels like we are on the very steep part of the learning curve. Every day we got off the water there is so much to debrief and talk about. It’s going to be a long journey to the start but something we are excited about.”

The addition of the foiling IMOCA 60 class adds a high-performance and design aspect to The Ocean Race. The last two editions of the round-the-world challenge were one-design racing. All of the boats were identical and no modifications could be made. This shift means the teams will be pushing the envelope of technology with boats that foil above the water at extremely high speeds.

The IMOCA 60 class is at the cutting edge of technology for offshore monohulls. The sailors and designers will be chasing every technical advantage they can find. Charlie and Mark started training in August, more than two years before the next edition of The Ocean Race kicks off.

“Personally for me at this early stage of our training, we’ve been sailing the boat short-handed, so we’ve had to do absolutely everything on the boat,” said Charlie. “As someone who is used to skippering on a fully crewed boat, that’s certainly a new challenge but also refreshing and we’re learning a lot.”

Check out this video from The Ocean Race. They visit Lorient, France to dig deep into the differences of the two classes and explain why this race is unlike any other the for the IMOCA class:

Are you a pollywog or a shellback? How many times

@enright_charlie leading at the front and not just

🐢#worldturtleday: Historically only 1 out of 10