The pair will race on the 11th Hour Racing IMOCA 60 boat formerly named Hugo Boss that made its debut at the 2015 Transat Jacques Vabre (TJV) and finished as runner-up in the 2016 Vendee Globe. It will be Bidégorry’s seventh time participating in the TJV.

“We are in full preparation mode for the start of the 2019 TJV and can’t wait to arrive in Le Havre on October 18 to take in the atmosphere and get in that racing mindset,” said Charlie Enright who will co-skipper the boat with Bidégorry in his first TJV appearance.

Bidégorry has more than 30 transatlantic crossings on his resume and holds numerous trophies, records and titles in races such as The Ocean Race 2017-18 (formerly Volvo Ocean Race), Multi One Championships and Solitaire du Figaro. In 2005, Bidégorry won the TJV on the ORMA 60 trimaran and 10 years later was victorious again in the TJV in the Ultime class of trimarans on board MACIF with compatriot Francois Gabart.

More recently, Bidégorry was the navigator on board Dongfeng Race Team that was the surprise winner of The Ocean Race in 2017-18, making the bold decision to sail the coast-hugging route into the finish in The Hague, Netherlands on the final day of offshore sailing and narrowly hold off two other boats further offshore for the overall victory. 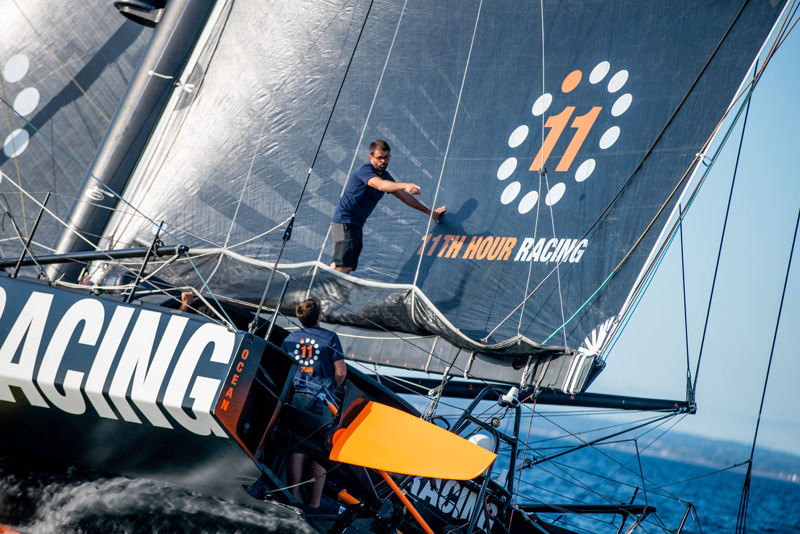 “Pascal knows the nuances, the ins-and-outs and all the particulars of sailing on these foiling IMOCA 60 boats, which is exactly the experience that we were looking for in this initial transatlantic race for 11th Hour Racing,” said Enright. “We’ve had a steep learning curve in our first two months out on the water and Pascal has been a big part of that.”

“We started working almost two months ago with the team, including the whole shore team, with a focus on the performance of the boat, and to improve each day,” said Bidégorry. “We have a lot still to be done but it’s all very exciting and I am really happy to be here as part of it.”

The pair will compete in the Azimut Challenge (Le Défi Azimut) September 18-23, one day after appearing at the TJV media day in Paris on September 17. Other training camps scheduled include several days offshore throughout September through early October and some side-by-side training with the new Apivia IMOCA 60 sailed by Charlie Dalin.

“For me, the most eye opening aspect in training has been that we have to do everything on these boats,” said Enright about the initial training. “My past two round-the-world experiences have been fully-crewed VO65 boats and sailing these boats two-handed — we are doing it all.”

See all the upcoming events and dates for the 11th Hour Racing Team here.