Get to Know Simon Fisher

Fondly known as SiFi, Britain’s Simon Fisher is certainly no stranger to The Ocean Race. As he prepares to go for round six, we find out about his sailing high and lows over the years, and his thoughts on the next edition of the race.

Q: SiFi, you’ve signed on for your sixth Ocean Race and you’re just 42, are you going for the all-time participation record?

Simon Fisher: It’s not something I’ve considered [laugh]. I think Bouwe (Bekking) would need to stop sailing before I could even get close to his record, and that doesn’t look like it will happen any time soon!

At the end of each race, I’ve never really felt that I’m done with it – instead, I’m more motivated for the next one. Maybe after this one I’ll feel as though I’m ready to press pause, but who knows? You’re never sure how you’ll feel after that much time at sea, running on adrenaline for months on end. At the moment, I am absolutely loving it. I’ve learnt so much already and that looks set to continue. We’ve found a balance so that my sailing works with my family life which is super important too. I’m really looking forward to competing again.

Q: Obviously with five previous appearances and one victory back in 2014-15 with Abu Dhabi Ocean Racing, this event has a special place in your heart. Why is that?

SF: There’s a quote about The Ocean Race getting in your blood – and it’s really true. It’s the one sailing event that I can remember watching as a kid in the 80s and saying ‘I want to do that!’ I remember vividly seeing the Whitbread and wanting to be part of it. I’ve been lucky to do a lot of things as a sailor: America’s Cups, keel boat racing, match racing, big multihull regattas, but it is The Ocean Race that really resonates and pulls me back in over and over again. In a lot of other sailing events, you’re hired in a very specialized role but The Ocean Race isn’t like that though – your role is more rounded: navigation, on-deck, in-port racing, long ocean legs. I like the variety.

The teamwork side of the race is a big thing for me too. There are few opportunities in other events for a long-term project with a team.  In that sense, The Ocean race is unique. You get to grow the team aspect, working together over a long period of time, which is an adventure in itself. The camaraderie that develops is really cool and makes the event incredibly special.

Q: What has been your best memory from all the years?

SF: It’s really hard to pin down one specific memory. There’s good and bad in every campaign, the highs and lows are part of the race and that’s why I love it so much.

I’ll certainly never forget winning the race in 2014-15. Taking the top spot in that first leg into Cape Town with Abu Dhabi Ocean Racing was a special moment. We set out what we intended to do, laser focused, and then executed our plan over the next nine months: it was hugely fulfilling.

The first race I did with ABN AMRO was also very special. We surprised everyone, including ourselves, with how we performed. There were some difficult moments that will live with us forever though, so it’s unforgettable in more ways than one. No matter how much time passes, I’ll always remember that first time being in The Ocean Race: it was a phenomenal adventure.

Q: So switching gears to looking ahead, what are the keys to winning this event, and how do you get into that mind set in the preparation period?

SF: This race is particularly interesting because we’re back in a development class. Every decision we make now will impact how we perform on the race course. As a team, it’s always a dream to be able to develop your own boat – and if you’re quicker than everyone else, the race itself is that little bit easier, especially as a navigator! Having a good group and a strong team around you is big, and Charlie and Mark have put together a top-level campaign. Always learning and progressing is key, not only in training, but once you are actually in the race. It’s a real endurance challenge, and you have to be improving the whole time – evolving constantly and learning from your competitors. The preparation we do now will allow us to take everything in our stride once we’re out on the race course.

Q: What are your thoughts on the foiling-IMOCAs?

SF: These boats are really exciting, one of the most exciting boats in the world right now. It’s a big draw for fans and a big draw for me to be involved in a class that’s on the cutting-edge of yacht design. There are challenges for any class of boats, but it’s an exciting challenge.

Q: You’re the team navigator… give us a quick top level breakdown of the route that was announced for 2021-2022. What stands out?

SF: I’m pleased we know what the route will be – it means we can plan and be prepared. It will be cool to visit Cabo Verde, but it does remove one of the tactical elements of that first leg that has always been a huge challenge. How far west do you head at that point in the race to set yourself up for the Doldrums – that used to be a defining moment.

Another one is Cape Town to China. You essentially go up the west coast of Australia and into the South China Sea. That’s very tricky navigation and it’s majorly stressful but I like to challenge myself.

The finish in the Mediterranean will make the race even more of a test. At the end of the race, people are tired, and the stopovers come in quick succession. I can imagine the stakes could be high. Expect super light winds and a nail biting finish, the fickle conditions in the Med will be a test. 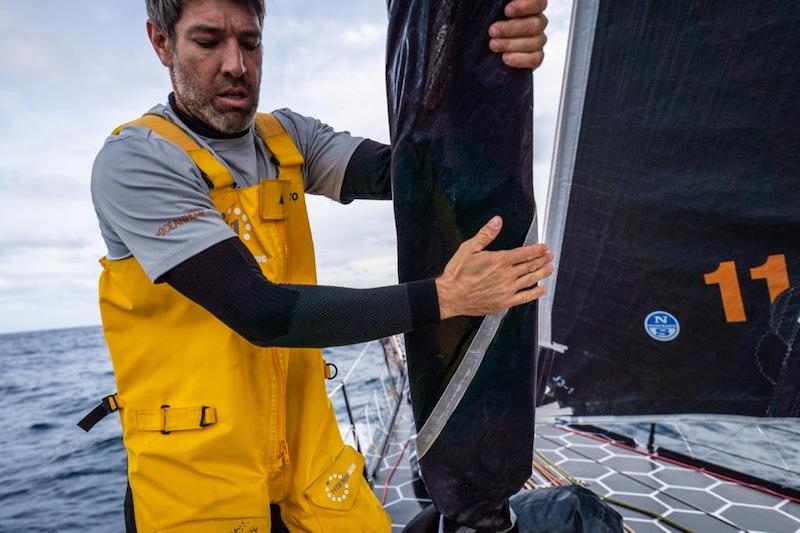 Q: You’re a lifelong lover of the ocean but you’ve also been a father now for several years, has that changed your relationship with the ocean and with nature at all?

SF: It definitely has. When I had my kids, it hit home that there’s a real responsibility to leave this place in a better state than when we  found it. I am always really encouraged when my kids are picking up litter and learning about our planet – whether it’s being mindful of the environment, recycling or pointing out things in nature. For them, it is second nature and I have real hopes that their generation will behave in a very different way to previous ones.

Q: What is your specific passion or interest when it comes to the team’s sustainability program?

SF: On the technology side, I’m interested in how we can turn renewable energy into a performance gain for the team. If we can show that we can be a winning team, performing at the highest level whilst also being sustainable, it’ll be a game changer for our sport – and indeed, sport in general. I really believe that we can embrace these values and also perform optimally. I’m motivated to become an ambassador and advocate for change. It’s all about convincing lots of people to take small steps and make a difference – that’s what I’m striving for.

Q: What do you do at home to try to live more sustainably?

SF: Being mindful of what I’m using is number one – I’m always trying to reduce the rubbish we create and we take our own bags shopping. They’re only small steps but they all add up to something bigger. We’ve changed our consumption habits so there’s less waste overall. If you think about it every day, every time you throw something in the rubbish, you quickly start making changes which will reduce your footprint. As a family, we really try to buy things that we are going to use for a long time, investing in quality. I love to fix things too, so we maximise the lifespan of a product. You’d be amazed what a little tinkering can do!

Learn more about SiFi in this podcast with Yacht Racing Life.