From city slicker to sailing sponsorship extraordinaire, our own Meredith Carroll sure has a great story to tell. Find out more in our latest Q&A.

Q. Growing up in New York City, can you share how you got into the sport of sailing?

Meredith Carroll: I was a sailor from a young age. My parents didn’t actually sail themselves, but my dad was really into Patrick O’Brian’s Aubrey-Maturin book series about sailing, so he really wanted his children to take it up.

Funnily enough, my two sisters and I did not want to sail at all. My mom ended up tricking us into it. I was around 10 years old when she told us we were going to the grocery store one day… only to take a turn down towards the water. We all thought: “This is not the grocery store!”

As much as we complained to begin with, we started to really enjoy it over time. We all ended up working at our sailing club in Long Island in the end, coaching younger kids. The best thing is that we’re still friends with everyone from our childhood sailing program. It was definitely worth it – I’m glad it wasn’t just a grocery store trip after all!

Q. You say you sailed in Long Island – are there opportunities to sail in New York City?

MC: There are indeed programs that offer sailing in the city. When I was living there as an adult, I sailed out of Manhattan Yacht Club a little bit. It was crazy to finish a day at work in a business suit, head downtown, change into sailing gear, and be on the water with the financial district in the background.

I didn’t know that there was much other adult sailing available in the city when I was living there, but I’ve since learned about Hudson River Community Sailing. It’s a great organization that’s actually a grantee of 11th Hour Racing. They offer a community sailing program for kids that incorporates STEM education into sailing, and they also have an adult racing program. If I was in New York now, I would definitely be sailing with them.

Q. This is your first Ocean Race campaign, how did you find yourself working with 11th Hour Racing Team?

MC: I actually used to work at a bank in New York City, so very different to the role I currently have!

When I was first considering a move to the sailing industry, I looked at the skills I’d acquired in the City and tried to match them to a role in sailing. I happened upon a job at a sports management company called Manuka Sports Event Management, where I ended up working in  2016-17. They work with a couple of offshore sailing events, including one that they created and continue to deliver – The Atlantic Cup. I was involved with the management of that: the event management, the marketing, a little bit of everything to do with sports events. 11th Hour Racing was a sponsor of the race, so I got to know them a bit while I was at Manuka. It was a great way to break into the industry.

After that, I joined the team at US Sailing and was there from 2017-19, working on the youth development program. Although I had pivoted towards youth sailing, I was still working with key stakeholders and sponsors, so it really set me up for the role I’m in now.

Q. What appeals to you about The Ocean Race?

MC: The first Volvo Ocean Race that I followed was the 14-15 edition. I was really into racing in college, and became super interested in the bigger sailing events like the Olympics and the America’s Cup.

Back then, I hadn’t even heard about The [Volvo] Ocean Race. Then, one day, someone explained to me how crazy it was in the context of food. They told me that when you’re out sailing on a leg and there’s no wind, if you slow down, you may not have enough food to get you to the next stopover. The thought that you could legitimately run out of food just blew my mind – I’m a big foodie!

After that, I thought The Ocean Race was the coolest race in the world. I started following it properly and realized just how incredible the sailing was. Alvimedica was my favorite team, being mostly American. I’d seen Mark and Charlie in Morning Light (big fan!). I knew I needed to find a way to be involved with the race… and now I’m here!

Q. You recently celebrated your one year anniversary working with the team. What’s been your favorite part of the last year?

MC: Well the last year has certainly been a little different to our original plans!

It’s not hard to pick out a highlight though. The team being in Newport was easily the best part. It was the first time that I’d met a lot of my colleagues in real life, after six plus months of seeing them on Zoom and liaising on emails. It was fun to finally meet people in person.

We operated in a little bubble, so it was a reprieve from COVID – other than that, I’d just be working from home all day. With everyone in Newport, I actually got to socialize. We were testing frequently and were able to operate almost as if life was back to normal. It was much needed.

Q. As Sponsorship Manager of the team, how do you get involved with the sustainability work the team is doing?

MC: Our title sponsor is 11th Hour Racing, so sustainability is inextricably linked to everything we do. It’s not ‘how do we get involved’, it’s always on our minds and we are constantly considering more environmentally friendly ways of working.

With each of our suppliers and partners, there’s usually a sustainability project or angle that we work on together. While our sustainability team spearheads this, I’m involved as the person who’s closest to the partners and sponsors.

I also help coordinate our grantee engagement. 11th Hour Racing has a number of grantees and we put together activations for them. The grantees host us, teaching us about what they do, so we learn about the local solutions they’ve created.

I helped coordinate the Clean Ocean Access activations while we were here in Newport, around promoting composting and ways to limit the environmental impact of shrink wrap. 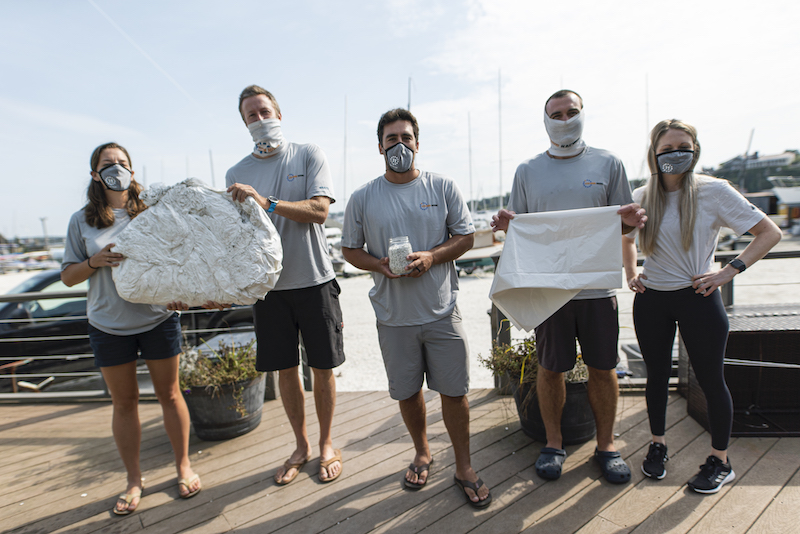 Q. What is your favorite sustainability life hack?

Q. You currently live in Newport, RI and are surrounded by the ocean as a result – what is your favorite way to connect with the ocean?

MC: In the summer I sail a lot. I was actually able to do that even during the pandemic, which was a relief. Now that it’s winter, we actually get pretty good waves. I’ve got a really thick wetsuit so I go out and… well, I’m not sure I’d definitely call it surfing, but I attempt to surf! That’s a lot of fun. I’m lucky to live here.